ORIGIN OF THE THOUGHT SCREEN HELMET

Thought Screens were described in the Science Fiction Novels of E.E. "Doc" Smith. Here are some quotes from the Gray Lensman novel series. 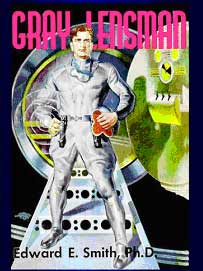 "Therefore, with every faculty of his newly-enlarged mind concentrated upon the thought-screened, armored head behind the billowing gun and flaring projectors, Kinnison held his line and forged ahead."

"Attentive as he was to Helmuth's thought-screen, the Patrolman was ready when it weakened slightly and a though began to seep through, directed at that peculiar ball of force."

"By means of improvements upon Velantian thought-screens the three destroyed a group of Overlords of Delgon, a sadistic race of monsters who had been preying upon the other peoples of the system by sheer power of mind."

"Thinking himself secure by virtue of thought-screens given him by a being from a higher-echelon planet name Ploor, Helmuth went alone to Arisia, determined to learn all about the Lens."

"Sure. I got most of the stuff I wanted last night, while I was changing your thought-screen battery."

"The Lyranians killed ten of them by direct mental impact or by monsters of the mind, but after that everyone who came out of the vessel wore thought-screens and the persons were quite helpless."

"Also, from the fact that everybody having any weight at all wore thought-screens, it was almost a foregone conclusion that they had been warned against, and were on the lookout for, THE Lensman - that never-to-be-sufficiently-damned Lensman who had already done so much hurt to the Boskonian cause."

"'Plane, ho!' came the report, and both vessels, with spy-ray blocks out now as well as thought-screens, plunged silently into a flatly-slanting dive."

"Helen of Lyrane ceased struggling in the instant of being drawn through the thought-screen surrounding the Dauntless."

"The horrible parasitism went on for ages. The Velantians fought vainly; their crude thought-screens were almost useless until after the coming of the Patrol. Then, with thought-screens that were of real use, and with ships of power and with weapons of might, Worsel himself had taken the lead in the clean-up of Delgon."

"And besides, there were the thought-screens and the highly probable other stuff about which the Lensmen could know nothing."

"Then Eich came up unseeing to the speedster's side and stopped. The drill disappeared. A thought-screen encompassed the group narrowly. Kinnison and Worsel released their thought-screens and also tuned into the creature's mind."

"What in all nine prime iridescent hells did that mean? He didn't know of anything except a thought-screen that could stop a sense of perception."

"Then he put on a mechanical thought-screen. Its use could not make the prime minister any more suspicious than he already was, and it was the only way he could remain in character. This thought-screen was, like those of Lonabar, decidedly pervious in that it had an open slit. Unlike Bleeko's, however, which had their slits set upon a fixed frequency, the open channel of this thought-screen could be varied, both in width and in wave-length, to any setting which Kinnison desired."

"I know what it is, and I do not like thought-screens, I prefer my mind be left free to roam."

"He had learned long since that the prime minister could not detect a Lensed thought, particularly when the Lensman was wearing a thought-screen, as he did practically constantly; wherefore the strategists of the Patrol were as well informed as was Kinnison himself of every move made by the Boksonians."

"The mental blast came ahead even of the first word, but the Gray Lensman, supremely ready, was already in action. One quick thrust of his chin flicked off the thought-screen."