"The aliens may be a million years ahead of us in technology, but they are still using physical forces which can be understood and controlled. The thought screen helmet demonstrates that the aliens communicate with some form of electro-magnetic energy and that form of energy, which may also be a form of telepathic communication, can be blocked or jammed. We are coming closer to learning about real alien technology by taking an intelligent approach to the problem."
— Michael Menkin

"Intelligence is not what you know, but what you do when you don't know."
— Piaget 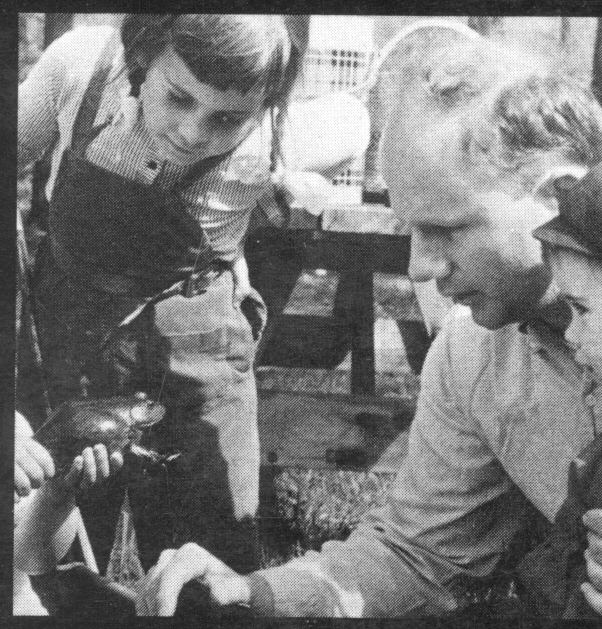 John Holt working with young children. Holt's remarks about intelligence are given because he says that intelligence is not capacity, it is not more of the same thing, rather intelligence is a way one perceives the world and responds to it.

Educator John Holt on Intelligence, from His Classic Book, "How Children Learn"

Intelligent children act as if they thought the universe made some sense. They check their answers and their thoughts against common sense, while other children, not expecting answers to make sense, not knowing what is sense, see no point in checking, no way of checking. Yet the difference may go deeper than this. It seems as if what we call intelligent children feel that the universe can be trusted even when it does not seem to make any sense, that even when you don't understand it you can be fairly sure that it is not going to play dirty tricks on you. How close this is in spirit to the remark of Einstein's, "I cannot believe that God plays dice with the universe."

On page 54 in the July 1958 Scientific American, in the article "Profile of Creativity," there is the following apt comparison:

The creative scientist analyzes a problem slowly and carefully, then proceeds rapidly with a solution. The less creative man is apt to flounder in disorganized attempts to get a quick answer. Indeed he is! How often have we seen our answer-grabbers get into trouble. The fact is that problems and answers are simply different ways of looking at a relationship, a structure, an order. A problem is a picture with a piece missing; the answer is the missing piece. The children who take time to see, and feel, and grip the problem, soon find that the answer is there. The ones who get in trouble are the ones who see a problem as an order to start running at top speed from a given starting point, in an unknown direction, to an unknown destination. They dash after the answer before they have considered the problem. What's their big hurry?

Elaine (adding tops and bottoms, as is her usual custom): Why not 5/9?

Yet I doubt that any amount of explaining could have made Elaine understand what Barbara was saying, far less enable her to do the same kind of thinking for herself.

The poor thinker dashes madly after an answer; the good thinker takes his time and looks at the problem. Is the difference merely a matter of a skill in thought, a technique which, with ingenuity and luck, we might teach and train into children? I'm afraid not. The good thinker can take his time because he can tolerate uncertainty, he can stand not knowing. The poor thinker can't stand not knowing; it drives him crazy.

This cannot be completely explained by the fear of being wrong. No doubt this fear puts, say, Monica under heavy pressure; but Hal is under the same pressure, and maybe I am as well. Monica is not alone in wanting to be right and fearing to be wrong. What is involved here is another insecurity, the insecurity of not having any answer to a problem. Monica wants the right answer, yes; but what she wants, first of all, is an answer, any old answer, and she will do almost anything to get some kind of answer. Once she gets it, a large part of the pressure is off. Rachel was like this; so was Gerald, and many others. They can't stand a problem without a solution, even if they know that their solution will probably be wrong. This panicky search for certainty, this inability to tolerate unanswered questions and unsolved problems seems to lie at the heart of many problems of intelligence. But what causes it?

Some might say here that this is all a matter for the psychiatrists. I am not so sure. A person might well be distrustful in personal relationships and still have a kind of intellectual confidence in the universe. Or is this possible? And if so, can it be taught in school?